The Site of Vernon D. Miller’s 1978 Photographs of the Shroud of Turin

The advantage of this Gallery is that the entire collection can be seen here. 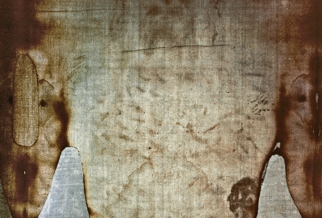 The original UV fluorescence photos were made on Kodacolor 400 color negative film in a 2 ¼ – inch format size by Vernon Miller and selected images were published in 1981 [1]. Miller reproduced the set of UV fluorescent photos as 4×5 in. color positives, some of which were recently digitized to ~13 Mb files in TIFF format with an Epson V750 Pro scanner. (These UV photos are found in the In-Depth Study, Section 6: Transparencies Ultraviolet Light 4 x 5 at the following photo numbers: 138, 139, 140, 141, 144, 150, 152, 156, 163 165, 176, 177, 179, 183, 186, 188) The color positives required computer image processing to retrieve the fluorescent details that were being obscured by the orange color of the film base and color-sensitive layers. Individual files were processed with the image analysis / processing software applications Camera Raw and Adobe Photoshop 2020. Each photo required further processing to reduce the effects of exposure and illumination non-uniformities that were discovered in the processing of the recently scanned UVs done with the Epson V750 Pro scanner (the scanner was in auto-light mode). Digital processing consisted of optimizing color balance and contrast to maximize the visibility of image details while avoiding distortion of the fluorescing color differences.

The digital scans were made by Dr. Gilbert Lavoie. Final UV fluorescing images were processed by Mike Verbois aided by Samuel Pellicori. Verbois and Pellicori worked with Vernon in the design and construction of the photo equipment before shipment to Turin. Pellicori constructed the UV filter used in the photography [Miller, V.D. and Pellicori, S.F.: “Ultraviolet Fluorescence Photography of the Shroud of Turin”, J. Biological Photographers Assoc. 49, No. 3, 71 (1981).